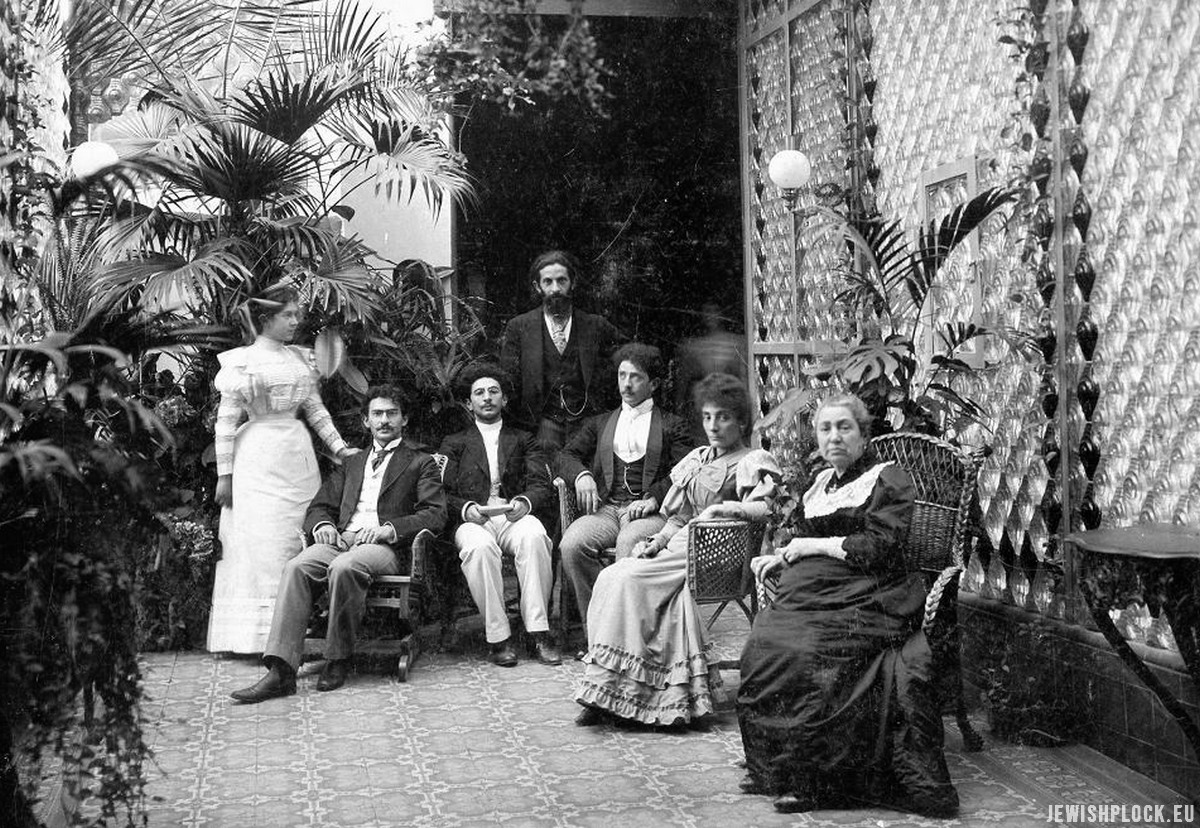 The history of the Flatau family in Płock dates back to the times of the Duchy of Warsaw, when Joachim (Nochem) Judas, a merchant from the Grand Duchy of Poznań, came to Płock from the town of Gołancz. In the Jewish civil registry documents of the town of Płock from 1814, on March 28, a marriage certificate was recorded of Joachim Judasz (born in the 18th century, died in 1865), who shortly after took the surname ‘Flatau,’ with Prywa nee Klejn, a native resident of Płock. After the death of Prywa (1826), Joachim Flatau got married to Berta (Brana) nee Nyrenberg, a resident of Dobrzyń nad Wisłą. They had seven children who, after reaching adulthood, left Płock and went to Toruń, then to Berlin (Dorota Kaliszer nee Flatau), Mława (Anna Kuroszkin nee Flatau), Vienna (Julian), London (Józef), Warsaw, later Radom (Maria Ciemierzyńska), Kalisz (Ludwik). Justyna Bogusławska nee Flatau stayed in Płock. In the early 1960s, Ludwik returned to Płock (born in 1831, died in 1895) with his wife Anna (Chinda) nee Heyman, a resident of Kalisz. The young couple lived in the property no. 321 at Kolegialna Street, purchased by Ludwik’s parents in 1834 and inseparably connected with the history of the Flatau family. This property had been the subject of a family conflict for several years, after the death of Joachim in 1865. By judgement of the Civil Court in Płock in 1868, property no. 321 was divided and auctioned. Berta Flatau was the first to buy it (through an intermediary) and later Ludwik, who had previously renounced his father’s estate, bought it from her for the same price, keeping the property for his family. Ludwik continued family traditions. In 1868 he was included in the 1st guild of merchants. Within a few years, as a grain merchant and banker, he became one of the wealthiest citizens of Płock. His enterprise named “Dom Handlowo-Bankowy Ludwik Flatau” [“Ludwik Flatau’s Trade and Banking Company”] was known not only in the Płock Governorate, but throughout the Polish Kingdom, the Russian Empire, the Prussian Kingdom, etc. Ludwik Flatau had a very good opinion as an entrepreneur in Toruń. The authorities of this city, important from the perspective of trade, agreed in 1873 that Ludwik Flatau together with his sons could obtain the transfer papers and passport of the Prussian Kingdom, crucial for him and his family. He lived in Płock on the basis of a passport and ran his business here. In 1875, the Flatau couple were the parents of four sons:

Parents showed great concern with the education of their children, especially sons, who after graduating from the Junior High School in Płock (Roman and Edward with medals, Julian and Henry probably also, but the school documents from those years were not preserved) went to study abroad (Edward graduated with honors from the Faculty of Medicine at the University of Moscow, Julian from the Faculty of Chemistry, there as well). Edward and Julian also received doctoral degrees in Moscow. In 1893 Edward went to Berlin and there, with other scholars, he conducted research in the field of neurology. The result was the discovery (at the beginning of 1897) of the law of the eccentric arrangement of long fibers in the spinal cord, which he presented at the Royal Prussian Academy of Sciences in Berlin. During this time, he also developed the Atlas of the Human Brain, and in 1912 published a book entitled Migraine. The Flatau children were constantly travelling (Warsaw, Berlin, Zurich, Moscow, Płock). They were returning to their family home less and less often (Helena and Edward settled in Warsaw, Edward was removed from the books of Płock residents in December 1908). Roman settled in Odessa for several years, Julian circled between Moscow and Odessa, where he married Fanny Landau. Only Henryk, an engineer, stayed in Płock and was the representative of the family company under the name of “Ludwik Flatau” and a member of the Management Committee of the Flatau Jewish Home for the Elderly and Disabled, which Anna founded after the death of her husband (in 1890) [you can read more about the initiative here: https://jewishplock.eu/en/13a-zdunska-street/ ]. Henryk Flatau was the last to leave Płock in 1907. He sold the family property (currently the Wedding Palace of Płock) at Kolegialna Street to a friend of the family (who later became his father-in-law), Jakub Neumark.

Written by Krystyna Grochowska-Iwańska on the basis of an article submitted to the Jewish Historical Institute in Warsaw, the printed chapters in the book: Edward Flatau i jego kometa by Piotr J. Flatau, source information comes from the State Archives in Płock supplemented with documents shared with the author by Piotr Flatau.