The history of the house at 28 Kolegialna Street in Płock 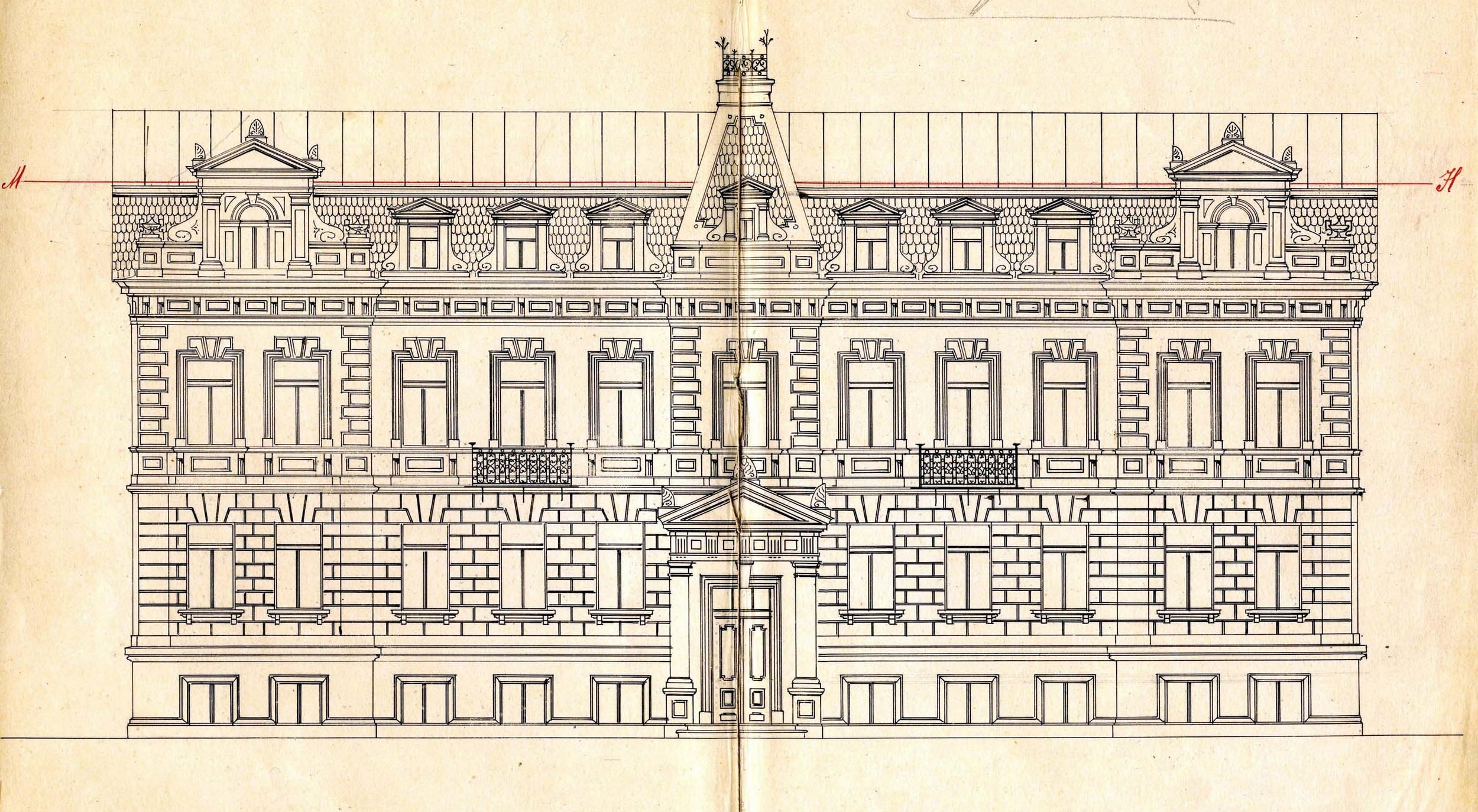 In the autumn of 2016, a characteristic tenement house at Kolegialna 28 street disappeared from the cityscape of Płock. Before the war it was known as the Jewish gymnasium (middle school). It is worth recalling the history of this place, which for two decades was associated with the history of Płock’s Jewish community.

At the beginning of the 19th century, the owners of the property (mortgage number 365 and 366) were Wawrzyniec and Helena Liszowski, from whom, on the baisi of the purchase contract from May 28, 1811, it was acquired by Tomasz Trzciński – the President of the Civil Council of the Płock Province, and also the Justice of the Peace of the Płock poviat and deputy for the Sejm (Polish parliament), heir of the Niszczyce estate in the Płock poviat, for 2,000 Polish złotys. In 1813, Trzciński purchased a neighboring property (mortgage number 367) from Stanisław and Tekla Paszkowski. His estate consisted of a brewery, a horse mill, a tenement house and other erected buildings, partly half-timbered. The property was inherited by his brother Jakub Trzciński. The next owner was Wojciech Elbrandt, an official in the office of the head of the Płock poviat and a member of the supervisory board of the savings bank and the hospital council of St. Alexius, who purchased it under the sale/purchase contract of 22 September 1835, for the sum of 55 000 Polish złotys. Under the contracts concluded in 1836 and 1841, he sold the property to Leopold Zieliński. After his death, the property was inherited by: Paulina Dorota Szumska, Maksymilian Filip, Michał Zachariasz, Julia and Helena Zieliński (siblings) and Elżbieta Umińska. The real estate was purchased on public auction from the successors of Leopold Zieliński for 8,500 rubles by Maksymilian Zieliński, who then, under the contract of May 25, 1858, sold it to Wilhelm Maltze for the same price. Under the contracts of June 16, 1858 and July 2, 1860, Wilhelm Schmeltzer became the new owner of the property. The next owner was a doctor of medicine and a member of the Medical Office of the Płock Governorate Władysław Tyrchowski. Later, the property was purchased by Adolf Grabowski, son of Antoni and Katarzyna nee Iwanowska, for the sum of 6,500 rubles.

In the autumn of 1883, Adolf Grabowski received a loan of 3,000 rubles to erect a two-story brick house on his land. The building was erected before July 1886 – according to the property insurance certificate from that period, there was also a stone, one-storey house with tiled roofs with residential rooms in the attic, wooden pig houses and toilets, and a cekhauz (gun storage), made of wood and stone. In the house of Adolf Grabowski, there were the quarters of 1 Rifle Regiment.

The next owner of the property was the wife of Adolf – Magdalena née Pawłowski, who was one of the first professional women photographers in Płock. Grabowska specialized in portraits in all size formats. Many of her photographs have been preserved in the collections of the Płock Scientific Society, including, among others, photos of Edward and Roman Flatau.

Under the contract of October 15, 1898, the property was purchased by Stefan and Maria Usakiewicz. In the same year, Stefan Usakiewicz was appointed to the position of a Płock city architect. Thanks to his efforts, the tenement house at 28 Kolegialna St. has become one of the most beautiful and unique buildings in the city of Płock. In the files of the Płock Governor’s Government, the project of a major renovation of the house with the mortgage number 365/6 at Kolegialna street, made by Stefan Usakiewicz in 1903, was preserved. The project included the replacement of all doors, windows, stoves, floors, front entrance, reconstruction of the façade, erection of two new extensions, reconstruction of the roof and arrangement of rooms in the attic. Among the preserved architectural drawings, the project of the facade of the building is particularly noteworthy.

In 1905, the estate number 365/6 at Kolegialna street became the property of Józef Zieliński. In the meantime, Stefan Usakiewicz was appointed architect of the Mława county. He designed, among others, the building of the historic Market Hall in Mława. In 1915, on the initiative of Lejba Kohn, the founding committee of the Jewish middle school in Płock was established. The school began to function the following year, and its manager was an outstanding and energetic educator Samuel Helling. As he noted in a letter to the Town Council of Płock dated November 23, 1916:

With the opportunity, I would like to direct your attention to the fact, that our school is officially named “Wyższa Szkoła Realna” (Higher Real School).

The 8-class Higher Real School, called the “Jewish Coeducational Gymnasium in Plock”, “Coeducational Gymnasium of the Welfare Council in Płock” or “Junior Gymnasium” occupied premises in a tenement house at Kolegialna Street 28. The chairman of the Gymnasium Care Council was Lejb Kohn, mentioned above. When Samuel Helling assumed the position of the director of the Jewish Gymnasium in Kalisz, Józef Kirstein took over his function at the Płock school. From 1924 in the tenement house at Kolegialna 28 street there was also the seat of a 7-class Public School No. 8 for Jewish children, the head of which was Pinchas Kahan.

The Jewish gymnasium, which functioned until 1935, educated 282 students. Among pedagogues, it is worth mentioning Chaim Frydman, Jakir Warszawski, Dawid Ejzenberg and Pua Rakowska. General subjects were taught in Polish, special attention was given to Jewish subjects (Hebrew and literature, Jewish history). The school was recognized as equivalent to government schools, which allowed graduates to continue their education at universities. Jewish society in Płock fully supported the institution financially. Unfortunately, the number of students dropped steadily in the thirties, until the school was forced to close its gates. In the meantime, on the basis of a testament delivered to the notary public Eugeniusz Płoski on 4 February 1927, the property at 28 Kolegialna Street was passed to Jadwiga Ziółkowska nee Zielińska by her mother Franciszka Zielińska (after her first husband) or Trojanowska (after her second husband). Under the contract of April 4, 1933, the property was purchased by dr Wacław Jaworski. At the outbreak of World War II, at 28 Kolegialna Street  lived, among others, Lejb Rozenberg, Chana Bajla Borensztejn and Boruch Silber with their families.

The building at 28 Kolegialna Street survived the war. In 1978, the owner at the time renounced ownership of the property for the benefit of the state. The building housed 13 residential apartments and 42 rooms, 1 commercial premise (linen press) and premises occupied by the Field Workshop of the Provincial Design Office in Warsaw. In 2008, the tenement house was sold to a private person. The building, which was the former decoration of the city, slowly became a ruin, and in the Autumn of 2016 it was completely demolished. This is even harder to accept since at the beginning of 2017 another object related to the history and culture of Płock Jews – one of the most beautiful sukkahs in Płock, located at the intersection of Tumska and Królewiecka Streets – also disappeared from the city space.