The history of the property at 8 Grodzka Street in Płock 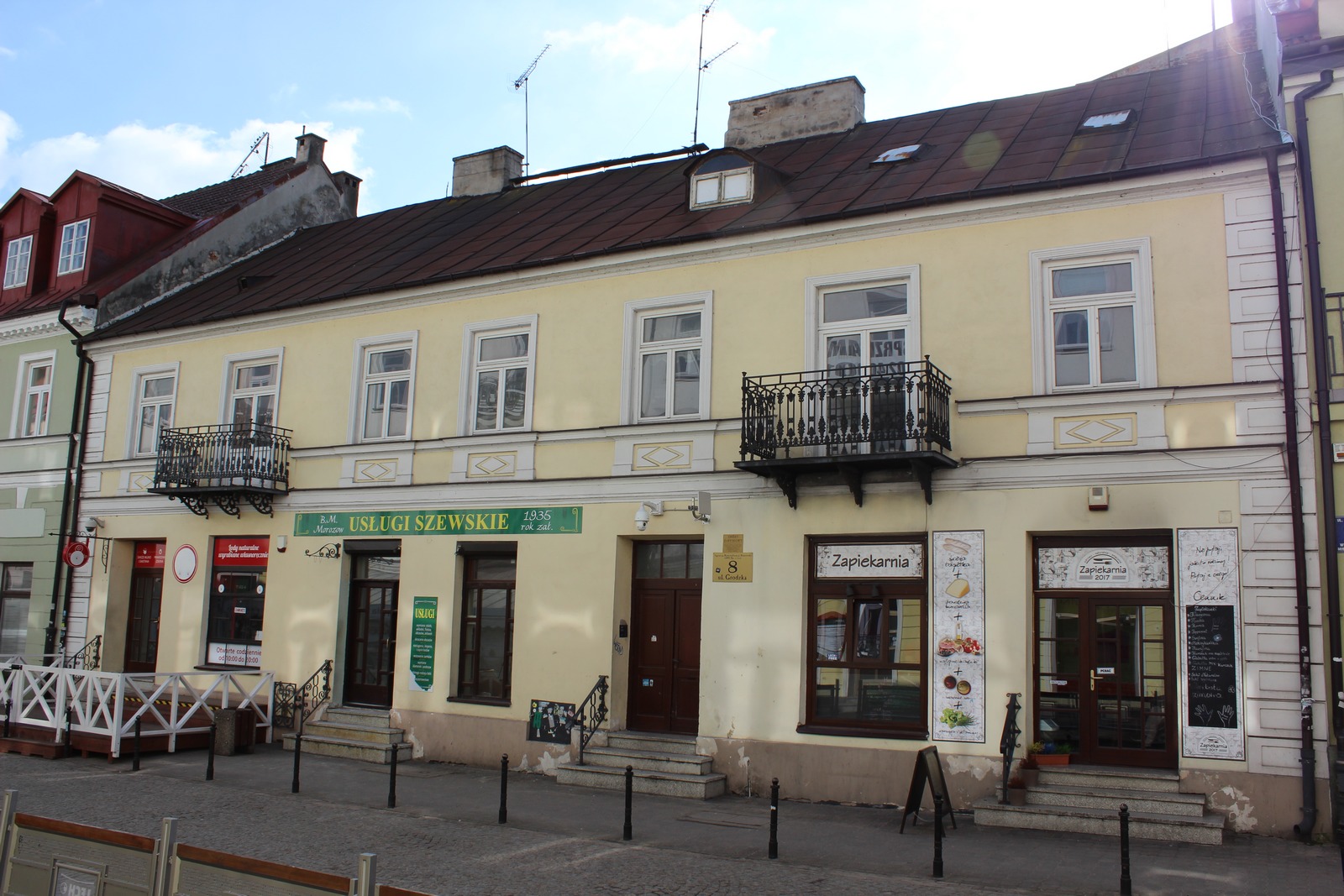 At the beginning of the 1820s, a brick house was erected on the square at current 8 Grodzka Street. Behind the investment was a merchant Mateusz Kalinowski, who in 1798 leased this square from the Sisters of Mercy. In 1826, the tenement house was purchased by his son-in-law – Józef Jędrzejewicz, secretary of the Criminal Justice Court of the Płock and Augustów Provinces. In 1832, the estate was purchased by Wilhelm and Anna Blankensztajn. Wilhelm Blankensztajn (around 1792-1850), who was a professional baker, came from Potsdam. Since 1855 Gustav Kluge (around 1810-1856) owned the property. In the mid-nineteenth century, the baker Moritz Schmidt, the watchmaker Emanuel Dreysohn, the midwife Józefa Borowska, the tailor Kacper Chrzanowski, Katarzyna Popławska who maintained the girls’ school and the shoemaker Józef Gierbliński lived here. After the death of Gustav Kluge, his daughters Emilia and Zenobia and son Julian Kluge inherited his property. At the auction in 1861 it was bought by Maurycy vel Moritz Schmidt. In the years 1875-1876, a new front house was erected. In the square, according to data from 1876, there were also three two-storey and a single one-storey brick outbuildings and a brick granary. After the death of Maurycy Schmidt, the owners of the property were the widow – Amelia nee Hinc and Rudolf and Lidia – his children. In the years 1887-1891, a new brick three-storey outbuilding was erected (from the side of Gimnazjalna Street – currently Małachowskiego) and a front brick two-storey house on Gimnazjalna Street. The property was subsequently purchased from the Schmidts by Ludwik Cylke.

The last pre-war owner of the property (since 1918) was Lewek Kilbert, born on June 5, 1882 in the village of Wiskiennice (commune of Żychlin), son of Jakub and Hyca née Herszkowicz. Kilbert was a board member of the „Peace to the Faithful Israelites” association, president of the Jewish community and Isoda Torah school, director of the Merchant Bank at 16 Tumska Street. His wife was Szajna Gitla nee Majeranc, daughter of Nusen and Złata nee Makower, born on May 31, 1876. At 8 Grodzka Street in the 1920s and 1930s there were fruit stores of Mojżesz Gelibter and Hersz Robak, the watchmaker’s shop of Moses Jakub Globus, silk cloth shop of Lewek Kilbert and Chaim Strzałka’s paint shop. According to data from the end of August 1939, the residents of the property were, among others, Berek Becak, Abram Moszek Budnik, Lewek Kilbert, Masza Bajla Szymańska, Josef Chaim Strzałka, Abram Sakwa, Abram Luzer Szechtman, Eliasz Wolf Zylberberg, Salomon Szoel Sztern, Rubin Mundsztuk and Kiwa Kenigsberg. Lewek and his wife were deported during the war to the ghetto in Warsaw, where they died of typhus.

During the war, Lewek Kilbert’s brother Moszek (born in 1890) was deported to Bodzentyn, and then murdered in Treblinka on November 16, 1942, and his wife Dobra Frajda née Bernsztajn (born in 1885). The nephew of Lewek Kilbert (son of Doba Frajda and Moszek) – Lejb Kilbert survived the war.

In the yard of the property there is a unique modernist style sukkah – one of the few preserved in the space of the city of Płock.