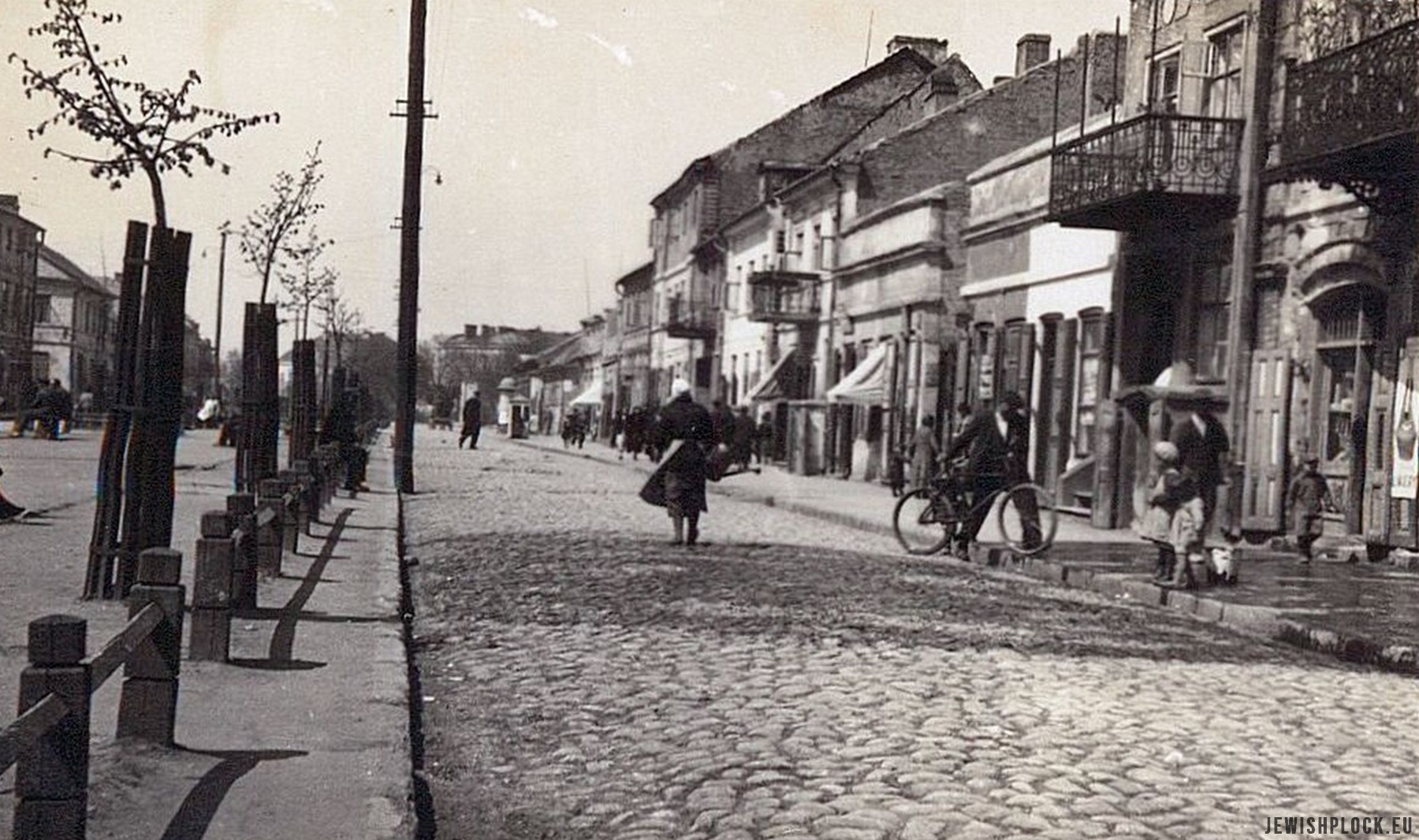 The first historical mention of the presence of Jews in Płock comes from 1237. It has been preserved in the town location charter issued by Bishop Piotr I, in which it was established that the town borders are from the tombs along the road leading to Czerwińsk, to the well of Wojsława’s church and the second Jewish well and the entire fence that leads to common road next to the Dominican Church. The organized Jewish community in Płock was established in the 16th century. At that time, Jews lived on Żydowska Street, located parallel to the Old Market Square, on its eastern side. In the 17th century, an administratively separated enclave of the Jewish population was established in Płock, including Żydowska, Bielska and Tylna Streets as well as shallow plots of land at the back of the market plots, forming the second front of Żydowska Street. Dating to 1803, a plan of the “Jewish town” in Płock has been preserved, showing the quarter of the city between the streets: Żydowska, Bielska, Jerozolimska and Tylna. According to the plan, the Jewish district included 77 properties.

In 1793, as a result of the second partition of Poland, Płock came under the rule of Prussia. In the years 1793-1809, the Prussian government, striving to expand the urbanized area by tidying up and connecting the suburbs, developed several plans for regulating the town, taking into account the demolition of the medieval defensive walls around the town center, which at that time strongly restricted communication and development of Płock. The line of buildings on Kwiatka Street was marked on the oldest surviving plan of the town of Płock made in 1793 by the construction inspector Göppner. For a considerable length, the newly designed street was parallel to the defensive wall, bending in front of the bishop’s palace and reaching Tumska Street. The design of Kwiatka Street then appears on the plan by the builder Schönwald from 1798 – Kwiatka Street begins here at the Wyszogrodzka Gate, at the end of Tadeusza Kościuszki Street, and runs parallel to the defensive walls, embracing the moat on both sides. The then Prussian authorities approved and largely implemented the project of regulating the town drawn up in 1803 by Schmid – Kwiatka Street was designed here with the creation of a large square between Bielska Street and Reformacki Square.

On November 8, 1811, the Duke of Warsaw, Fryderyk August, issued a decree on the basis of which a Jewish district was created in Płock. Article I of the decree defined the streets where the Jewish people could live. These were: Jerozolimska (from the Old Town Square to the street called Przykop), Synagogalna, Tylna, Przykop (from Bielska to Tumska), Więzienna (from the Reformed Monastery to Tumska), Ostatnia (from the Reformed Monastery to Tumska), Bielska (from Przykop “as far as into the fields”) and Mojżeszowa (from Przykop to Ostatnia).

Of the above-mentioned, the main street of the Jewish district, and also the main street of Płock, connecting the new district with the old town, was Przykop Street. This street was then called Nowa (the name coexisted with the original name), sometimes the term “Nowa nad Przykopem” was used. In the 1830s, the street began to be called Szeroka, which reflected its topographic character. In the mid-nineteenth century, Szeroka Street, which was called the town’s bazaar, was one of the most developed streets in Płock.

In 1935 the street was renamed to Józefa Kwiatka Street to commemorate the socialist activist and journalist who was born in Płock in 1874 and lived with his family in the house number 45. During World War II, its name was changed to Breite Strasse . In 1940 it was part of the ghetto which the Germans liquidated in 1941, when thousands of Płock Jews were transported to extermination camps. On March 23, 1994, during the meeting of the Street Nomenclature Commission, there was a planned proposal to restore Kwiatka Street to the name of Szeroka, which, however, failed.

Before the war, Kwiatka Street was compared to the Nalewki Street in Warsaw. It was a busy communication route, with numerous shops, workshops, service and food points. According to data from 1937, 145 trade establishments and craft workshops of various industries operated here.

Józefa Kwiatka Street was the heart of the Jewish district in Płock. There was a Jewish school (small synagogue) at the street, private houses of prayer, cheders, seats of the Jewish Funeral Association Bieker Chajlim, the Makabi Jewish Gymnastic and Sports Society and the Association of Workers’ Physical Education “Jutrznia”, among others. Jews of Płock were not only the owners of tenement houses on Kwiatka Street, but also dominated among its inhabitants and owners of commercial establishments and craft plants. Registers of the permanent population of the town of Płock record (for the period 1878-1897) over 13,700 people of Jewish origin registered at Szeroka Street. In turn, the census drawn up on the eve of World War II showed 3,378 people living on this street. Among the numerous inhabitants, there were many outstanding people, such as Aron Pinkus Kohnsztam, Artur Ber, Mieczysław Themerson or Józef Kwiatek, who went down in the history of the town.

In the second half of the 20th century, Józefa Kwiatka Street was rebuilt: the underground water and sewage systems, central heating, gas, telecommunications and energy cables were replaced and expanded. From the spring of 1997 to the end of September 1999, a series of stylized residential and commercial tenement houses was built between Kwiatka and Staromiejska Streets. In February 2005, a preliminary comprehensive revitalization plan for the Old Town was developed, in which, apart from the Old Town district from the Middle Ages, with the Old Market Square, Gabriela Narutowicza Square and Plac Trzynastu Straconych (Square of the Executed Thirteen), the Vistula embankment with the hill was included, as well as Tumska and Józefa Kwiatka streets. In the second half of 2006, the facade of the building at 9 Józefa Kwiatka Street was renovated. As part of the revitalization of the Old Town, in September of the same year, the historic frontage at 15-25 Józefa Kwiatka Street, with a corner tenement house called the Rabbi’s House, was renovated and modernized. In the competition of the Polish Association of Construction Engineers and Technicians, Construction of the Year 2006, MTBS company in Płock received a distinction for the revitalization of this facility. The largest investment in the Old Town carried out as part of the revitalization of this region of Płock was the construction of a tenement house complex at the intersection of Sienkiewicza, Bielska and Kwiatka streets, known as Złoty Róg (lit. The Golden Corner), in 2009-2012.