48 Sienkiewicza Street – the factory of the Sarna family 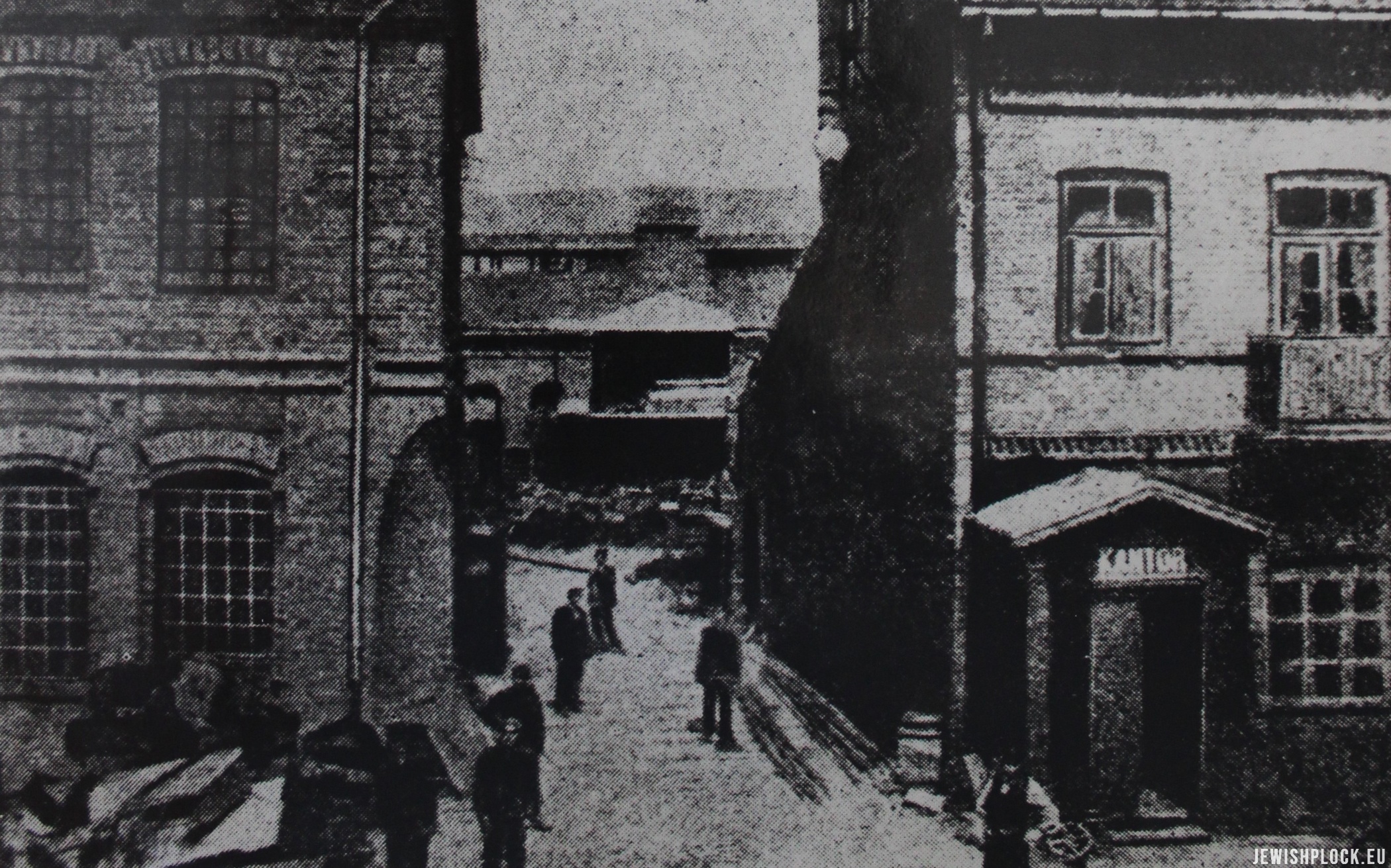 The property located in Płock at 48 Sienkiewicza Street (formerly Więzienna Street), on its northern side, is part of the former building complex of the Sarna Agricultural Machines Factory. The enterprise was located on squares marked with old mortgage numbers 237, 192, 193 letter B and 183. Moszek Szlama Sarna was the owner of them under the acts of July 23, 1878, November 10, 1882, September 19, 1883 and March 5, 1900.

Moszek Szlama Sarna (1838–1908) – a Płock-based industrialist, was the son of Isser Szaja, a sheet metal master, and Chana née Purzyczka. His wife was Fajga nee Ejzenberg (born 1838), with whom he had four children: three sons – Izydor (born 1876), Saul (born 1880), Szymon (born 1881) and a daughter Adela (born 1883). Sarna was interested in agriculture and its mechanization from an early age. He made many trips around Europe, and after returning to Płock, he invested all his capital, amounting to 100 rubles, in agricultural machinery (threshing machines) from Gdańsk. Then he started to import plows, threshers and seeders from Poznań, which he then sold to local farmers. In the 1860s, he set up a small repair workshop where he repaired agricultural machinery imported from abroad and from the Cegielski Factory in Poznań. As early as in 1864, at the industrial and agricultural exhibition in Warsaw, he received a medal for precise production of agricultural machinery for practical use for exhibited agricultural tools. The enterprise gradually expanded, and in 1870 its workshops were transformed into the Agricultural Machines and Tools Factory in Płock. According to a press advertisement published in the “Płock Calendar” for 1876, Sarna’s company had a large selection of the most practical agricultural machines and tools, among which the original Września plows, harrows, scratchers, dredgers, extirpators, Coleman cultivators, Robilard Bennajd and Drewitz seeders, patented potato digging tools, reapers and reapers-mowers, manages and threshers, choppers, pumps, water jets, peat mowers, carts and carriages. In 1870, 23 people worked at Sarna’s factory, in 1885 – 50, in 1899 – 65, and in 1914 – 77.

In February 1881, Moszek Szlama Sarna asked the town council of Płock for permission to build a foundry and metallurgical plant on its square between Więzienna and Królewiecka Streets. It was the first iron foundry in the town, in which employed molders made castings for the production of agricultural machinery. In the pages of “Korespondent Płocki”, Sarna placed an advertisement for his iron foundry, operating at a factory of agricultural machinery, according to which it started working on July 1, 1881. The foundry was equipped with one bell-foundry with two drains. Raw material for Sarna castings was imported from England and Scotland. Sarna offered a large selection of practical agricultural machinery and tools at affordable prices, all kinds of iron, hard coal, cement, wax, tar paper, stone tar, agricultural seeds, grain bags, decimal scales and all iron accessories. The assortment also included fodder seeds.

In 1883, Moszek Szlama Sarna built a forge and a locksmith’s workshop on his property. In 1884, a design was drawn up (unfortunately not preserved) for the erection of a front, one-story residential house with an iron-sheet roof at Więzienna Street. Its author was the architect Konrad Bałaziński (1850–1885). At the same time, a one-story outbuilding was erected in the yard of the property for the office of the agricultural tools factory. In 1885 Sarna moved the iron trade to the building at Więzienna Street – fragments of the advertisements with the inscription “iron store” are still visible on the facade of the tenement house.

In the same year, Moszek Szlama Sarna presented agricultural machinery produced by his company during the agricultural and industrial exhibition in Warsaw. Sarna’s exhibition was awarded a bronze medal, the drawing of which appears in the factory’s advertisements in the local press. Sarna received another bronze medal in 1899 at the exhibition in Płock, for continuously striving to improve his products, introducing self-lubricating device bushings in threshers and presenting a collection of his own product casts at the exhibition.

In the autumn of 1888, Moszek Szlama Sarna asked the town council of Płock for permission to erect a brick, one-story outbuilding on his property. In 1889, he asked for permission to build a brick two-story outbuilding with a one-story extension. In 1893, a two-story building was erected on the property, intended for warehouses for metallurgical and foundry materials. In 1900, Moszek Szlama Sarna erected an extension to a part of a two-story brick front residential house and a new brick one-story building housing a locksmith’s and carpentry workshop, as well as a warehouse for agricultural tools and machines. At the beginning of the 20th century, the property of Moszek Szlama Sarna was electrified and water and sewage systems were installed. In 1905, new brick two-story warehouses and brick two-story workshops with roofing felt were erected on the property. Before August 1907, a new brick building with a metalwork and carpentry shop with a roof covered with tar paper was erected in Sarna’s property, and the following were rebuilt: a brick building with a steam boiler and a steam engine, with a roof covered with tar paper, a brick building with a workshop, with a roof covered with tar paper, with a wooden annex covered with boards and a brick outbuilding with living quarters and iron storage, with a tiled roof. In 1909, the front tenement house at Więzienna Street was extended by one floor. The stairs in the front house and in the part of the outbuilding adjacent to the front house were also rebuilt.

Moszek Szlama Sarna died on October 18, 1908. He was buried at the local Jewish cemetery. The Płock press then wrote: “The deceased deserved good recognition for his activity aimed at the development of the domestic industry. His products won awards and recognition at national agricultural exhibitions. Good relations between the deceased and his colleagues should be emphasized”.

After the death of Moszek Szlama Sarna, the property was inherited by his children: Izydor Sarna, Saul (Stanisław) Sarna and Adela Gufnagel (under the protocol of closing the inheritance proceedings of April 5, 1910). Adela Gufnagel gave her rights to the inheritance to her brothers for the sum of 7,900 rubles. Then, Izydor Sarna purchased from his brother Saul his indivisible part of the property for the amount of 50,000 rubles and, under the act of October 28, 1911, he was registered as its owner.

In 1911, Sarna’s factory took part in the agricultural exhibition in Mława, and at the same time opened its branch there with a permanent exhibition of its products. On this occasion, the monthly magazine “Świat” recalled the development path of the factory, pointing out that from a small workshop for repairing agricultural tools in 1870, it turned into a large industrial plant, employing 120 people. Before the outbreak of World War I, the company led by Izydor Sarna stood at the peak of technical and commercial development, playing a significant role in domestic production. Sarna took an active part in organizing agricultural exhibitions and shows, cooperating with various agricultural organizations.

Izydor Sarna was a graduate of the Higher Engineering School in Mittweide. After graduation, he was an intern at the Mac Cornick factory in the United States. He developed a technology for the production of new agricultural machinery. He was an outstanding constructor who contributed to the development and modernization of the company inherited from his father. Agricultural machinery from his factory was exported, among others. to Germany and Russia. Izydor Sarna was also a well-known philanthropist in Płock. He was, among others member of the Association of Mutual Assistance of Jewish Trade Workers. In 1914, he co-founded the Committee for Aid to Jews in Płock, was a member of the Civic Committee of the town of Płock, and from 1915 he was a member of the Council of the Jewish Community. In 1917 he was elected a member of the Płock Town Council. He was also active in the Credit Society in Płock, he financially supported the Sunday Trade School.

In 1927, the Sarna Agricultural Machines and Tools Factory, located in the town center between Sienkiewicza, Królewiecka and Bielska Streets, had three steam and electric engines with the power of 65 HP and 70 auxiliary machines. In total, it employed 105 people, and the number of machines produced in 1926 was 2000. The factory was involved in the production of simple machines and devices, such as cultivators, common harrows, whiteners, horse rakes, seeders, threshers, as well as grain cleaners and mills.

In 1929, the Sarna Agricultural Machines and Tools Factory took part in the General National Exhibition in Poznań, during which it presented threshers, cleaners, chaff-cutters, treadmills and agricultural tools.

According to the 1931 census, the factory owner, his wife Eda (born 1890) and daughter Anna Felicja Róża (born 1930) and their closest associates lived in the front tenement house at 48 Sienkiewicza Street (police number 28 at that time). Eda Sarna, wife of Izydor, was a well-known activist from Płock, actively involved in the work of the Society for the Care of Jewish Children in Płock.

In the first weeks of Nazi occupation, the Sarna factory continued to work. The Germans allowed Izydor Sarna to continue his work as a specialist. At the end of 1939, he left Płock with his family. The Sarna factory, along with two others operating in the interwar period in Płock – owned by Maurycy Margulies and Paweł Urbański, at the end of 1939 became part of one enterprise under the name of Maschinen Industrie.

After the end of World War II, by the decision of the Government Plenipotentiary for Economic Affairs No. 18/09/27 of February 19, 1945, the property at 48 Sienkiewicza Street was incorporated into the Płock Industrial Plant. The factory was subordinated to the Union of the Metal and Electronic Industry for the Łódź District in Łódź. Pursuant to the decision of the Ministry of Industry and Trade of September 15, 1948, it received the name “Harvesting Machine Factory – Separated State Enterprise in Płock”.

In the factory’s property at 48 Sienkiewicza Street, flats were allocated to employees of Płock Industrial Plant. In 1976, the buildings of the foundry of the Sarna Agricultural Machines Factory were entered in the register of monuments. The tenement house at 48 Sienkiewicza Street, belonging to the town, was handed over to the Municipal Social Housing Society (MTBS) a few years ago.