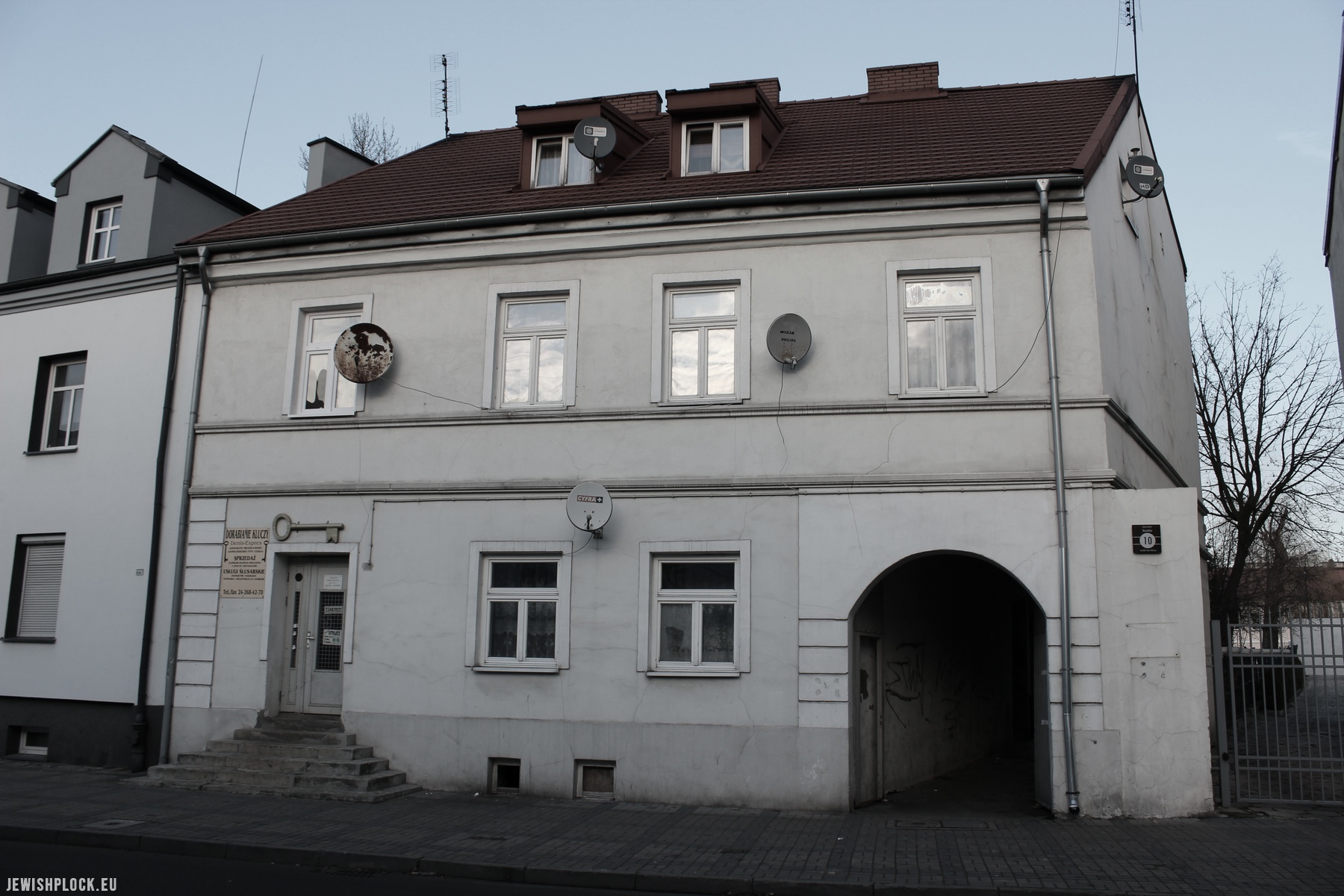 The empty square marked with mortgage number 256 at the former Szeroka Street belonged to the police director Wilhelm Czarnowski at the beginning of the 19th century. After his death, the property was inherited by his juvenile sons – Juliusz and Henryk Czarnowski. As a result of the auction held at the Municipal Office on June 7, 1825, the square was bought by the merchant Falk Landau Kempner and Jakub Lichtensztajn. Lichtensztajn on his part of the square, henceforth numbered 256 A, erected a brick house, a wooden storage and a woodshed, which were insured for 7,200 Polish złoty. Under the sale and purchase contract of February 23/March 7, 1843, Icek Fogel (ca. 1806–1869) purchased the property from Jakub Lichtensztajn together with his wife Rasza née Marsap. Icek Fogel was a banker, grain merchant, religious and social activist. His son was Gustaw – an industrialist and social activist, initiator of the establishment of the “Zgoda” Cooperative and Loan Fund in Płock. The next owners of the property were Hersz Schönmann and his wife Rozalia née Frankensztajn, who purchased it under a contract of 4/16 June 1865. In 1867 Ludwik Rychter bought the property and in the same year he sold it to Jakub Szulim Altman under a contract concluded on May 10-22, 1867. After the death of Jakub Szulim Altman, the parts of the property were inherited by: Icek Altman (3/8 of the property), Mosiek Altman (3/8 of the property) and Sura Lasman née Altman (2/8 of the property). By virtue of property divisions between the Altman siblings made on November 19/December 1, 1870, Mosiek Altman became the owner of the property. After his death, the property was inherited in equal and indivisible parts by Chaja Frajda Hak née Altman, Ruchla Lebendiger née Altman, and Juda Majer Pszenica – his daughters and grandson. They were registered as owners on the basis of an application to close the inheritance proceedings of November 3, 1909. In 1913, Ruchla Lebendiger, wife of Jankiel Lebendiger, purchased a part of his property from Juda Majer Pszenica. The Altman sisters – Chaja Frajda Hak and Ruchla Lebendiger were its owners until the outbreak of World War II.

The yard connecting 10 Szeroka Street and Sienkiewicza Street was one of the most characteristic places of the Jewish district in Płock. It was the so-called “Altman’s courtyard”, which was brilliantly described by the Jewish publicist from Płock – Natan Lerman:

In Płock, as well as in other towns in Poland, there were courtyards that were themselves like small towns. In fact, they were like closed worlds. In such a courtyard, Jews of all social groups and classes lived their lives: cobblers, tailors, carpenters, plumbers and other craftsmen. In addition, in the courtyard there were Chadarim of the Hassidim, a dancing hall, teachers of Gemara, Torah scribes, porters, peddlers, stonecutters and even criminal lairs. In short, everything from the most holy to complete sin. I would like to describe one of those courtyards.

The place where I was born, in crowdedness and shortage of proper conditions alike other poor children, was called “Altman’s Courtyard”. We were so used to that environment, in spite of all its disadvantages, that sometimes it seemed to us that it was the way things should be. We simply loved the “courtyard” and its small world because we were tied to it with a thousand threads that were inseparable. Only today, when I am so far away from Płock and from Altman’s courtyard, I can see it in a different way.

In Płock there were other big courtyards as well: the ones of Praszker, Bruzda and more. However, not one of them equaled Altman’s Courtyard. Except for it being like a small town, it was the route that connected two streets and through which people went from the synagogue, that was located on Szeroka Street, to the mikvah, which was on Sienkiewicza Street. Well, was there anyone who didn’t cross Altman’s Courtyard? On eves of holidays and especially on Rosh Hashanah and Pesach eve, the poor people used to change the straw in their mattresses. The women, while dragging the bundles of straw and leaving straw stalks here and there, rubbed the pavement so well, that there was no need to sweep it for the holidays. It was a frequent view and therefore I remember it well.

About 250 permanent inhabitants, 40-50 families, lived in the yard. In addition, there were also occasional vagabonds who used to sleep there in the basements. Regular guests in the yard were the Hassidim from the Rabbi of Góra Kalwaria. The three rooms of their house of prayer were always filled with noise and turmoil of more than 100 children, who were studying there. If we add to those mentioned above the customers of the craftsmen and people who came to the dancing hall, sometimes there were more than 1000 people, or even more in the yard.

It is not hard to imagine the noise and the turmoil in the yard when its inhabitants started their daily routine. The first one to announce the neighbors of the beginning of a new day was always the woman who engraved letters on tombstones. She used to cry loudly and mourn her bad fortune, while cursing awfully. She also earned her living by supplying fresh bread to the houses of the rich people every morning. When the heavy steps of the janitor, who walked to the synagogue for his daily chores wearing his heavy boots, were heard, everyone was already awake. Right after him you could hear the cough of Eliasz the carpenter and then the cough of Mosze the plumber, and then of Szlomo the porter, of Hirsz Aron the hatter, of Bejrysz the tombstone turner, of the craftsmen, butchers, the Torah scribes, the cantor. Each one of them coughed in his own style and in this way got ready for Shacharit. Later, the women would come out and their faces looked as if swollen from the night sleep. They would go down, holding kettles, to the basement of Gołda Lea to buy some hot water for the breakfast tea. Then a variety of voices and noises was heard from each place, until twilight. Then the pupils of the chadarim used to fight among themselves, and it usually ended with some broken window glasses.

And so life passed, day after day, year after year, at Altman’s courtyard in Płock.

Before the war, at 10 Kwiatka Street there was a haberdashery store of Icek Zelwer and a grocery store of Gołda Lemberger.