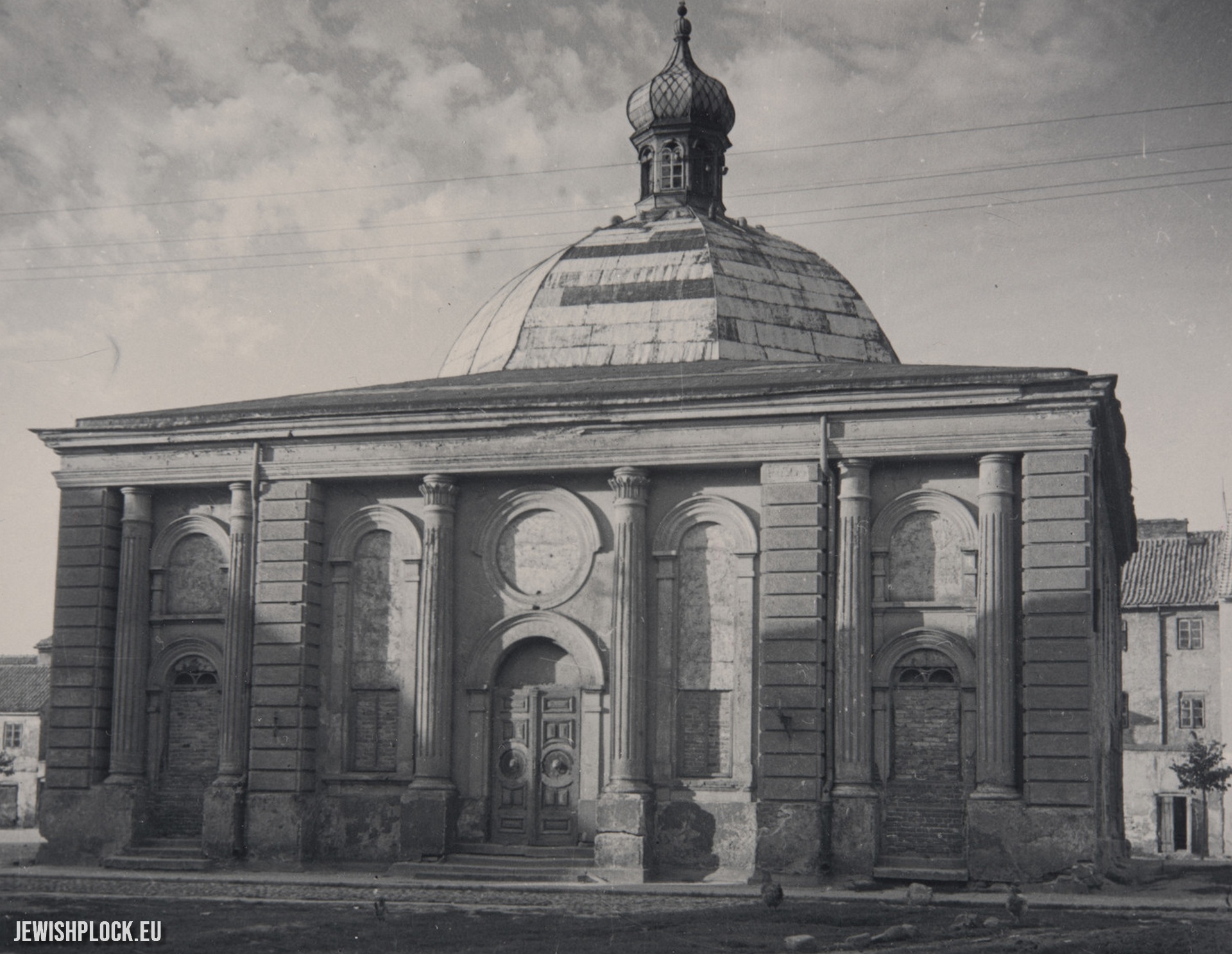 The currently non-existent building of the main synagogue of the commune, located on the square between Synagogalna (former Jewish Street) and Tylna  Streets, on the property marked with the mortgage number 32, was erected after 1810. The synagogue was a place of prayer and religious gatherings, ceremonial services were held here on the occasion of the name day of Ignacy Mościcki, the anniversary of the January Uprising, the repulsion of the Bolshevik invasion or even the Days of the Sea.

The five-axis facade of the two-story high synagogue was characterized by a heavy, architecturally rich composition with distinct vertical accents, similar to Roman rather than Hellenic classicism. The main entrance was located in a shallow archivolt, ending with a semi-circular arch with a broad pediment, based on pilasters. Above the door was a large, shallowly profiled rosette. This part of the façade was marked by two three-quarter high, fluted columns, based on high prismatic plinths, running up to the entablature, the only horizontal accent of the building. Placed outside of these columns, running through two floors, arched windows were decorated with richly multiplied pediments. These windows were separated by two transversely bossaged pilaster strips, congruent to three-quarter columns, based along with pilaster strips on double plinths. The same pilasters with the pillars were placed on the outer ends of the building. Between the pillars there was a door on both sides of the building with richly profiled pediments, based on pilasters and similar semi-circular windows in the upper storey. Squeezing large architectural forms into the frontage of the narrow street, depriving the building of cornice, allegedly existing and perhaps removed in the middle of the 19th century due to regulations limiting the height of synagogues, as well as grim, especially inappropriate for this architecture dark brown oil painting – seriously diminished architectural effects of this exceptionally heavy facade . The idea behind the architectural concept was also devaluated by the semi-circular dome, which was not synchronized with the building, with a disproportionately small and light turret placed on it, which ended with a tin onion-shaped cupola. The building was reconstructed in the 1920s. The classical character of the synagogue is consistent with the fact stressed in the literature that synagogues were erected in a style similar to local constructions from a given period, and only the layout of the interior complied with the requirements of rituals and customs.

During the Nazi occupation, the building was used by the Germans for a car workshop and a bus garage. The synagogue was demolished in 1951.