The sukkot of Płock 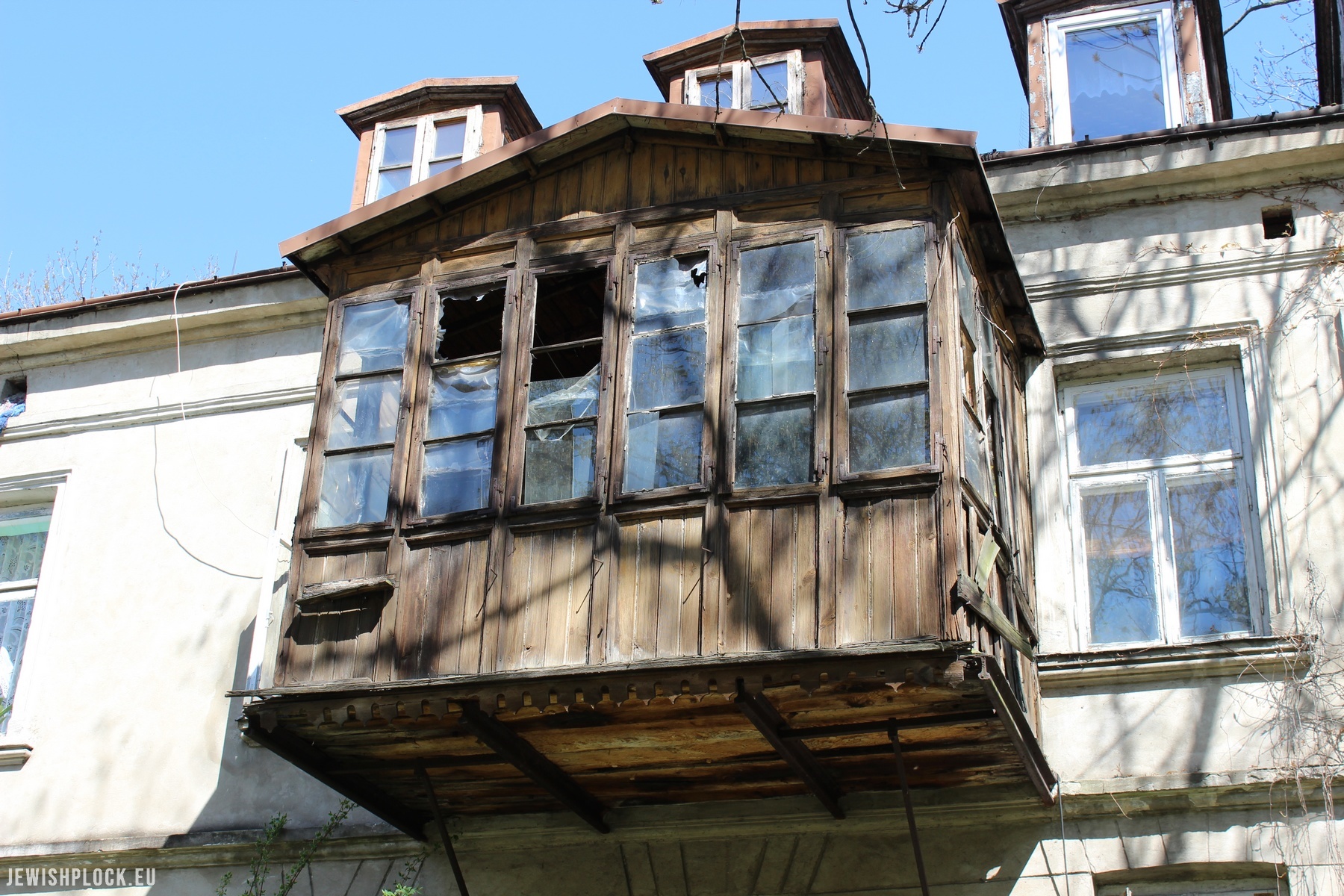 Sukkot (Festival of Tabernacles, Festival of Shelters) is a holiday commemorating the Israelites’ exodus from Egypt and wandering in the desert during which they experienced direct divine protection. At the time of this holiday, the sukkot (in Polish „kuczki”) are being built, in which people eat meals, sometimes also sleep, to remind the shelters in which the Israelites stayed in the desert.

What did the sukkot look like in the space of the old, 19th century Płock? In the collection of the Files of the Town of Płock, kept at the State Archives in Płock, there is a design of an outbuilding, made by Zdzisław Zawodziński in 1871, for Abram Josek Lula from Pułtusk, a grain merchant and owner of a property located at 5 Józefa Kwiatka St. The project involved erecting a two-story building, covered with a single-pitched roof: at the ground floor level (with brick walls), this building was to house a woodshed and a cart storage, at the first floor level (with walls covered with oil-painted boards ) – a sukkah was placed. The document shows that the sukkah was a rectangular room with a usable area of 3.35m x 4.75m, 2.74m high (height with roof – 4.57m). A hallway led into the room inside of the sukkah. On the first floor there was also a small room, adjacent to the sukkah on the other side.

In addition to wooden structures, wealthy Jews also erected brick sukkot in their properties. Before 1872, the brick-built sukkah at Synagogalna Street (mortgage no. 39) was built by Szlama Kowalski, and in 1894 at the Old Market Square (mortgage no. 5) – by a well-known Płock merchant and social activist Izrael Kirsztejn (1828-1916).

In the collection of the Files of the Town of of Płock there were also numerous requests to the town authorities for permission to erect sukkot, which were supposed to be rather ephemeral objects – Jews were often obliged to dismantle them after the end of the holiday. In the year 1877 alone 171 such permits were issued. The most of the structures were erected in the heart of the Jewish district – at Szeroka Street, but also at Synagogalna, Niecała, Jerozolimska, Bielska and Więzienna Streets. In the town space, the sukkot could also be found at Dominikańska, Płońska, Mostowa, Misjonarska, Kolegialna, Grodzka, Królewiecka streets and the Old Market Square.

As sources indicate, for the duration of the Sukkot holiday not only were the huts erected in Płock, but also private prayer houses were opened (the Great and the Small Synagogue were able to accommodate a total of only about 1500 people at a time). In 1892, in connection with the approaching holiday, at the request of the Synagogue Supervision and Rabbi Juda Bejman, the Town Council of Płock agreed to open 19 temporary prayer houses, among others at Synagogalna Street at the Dancygier school (mortgage no. 34/5), at Zduńska Street at the seat of Talmud Torah (mortgage no. 107) and at Misjonarska Street at the Izaac Fogel Hospital.

The sukkot preserved in the current city space of Płock

The sukkah is visible from Mostowa Street, it is adjacent to the rear wall of the two-story outbuilding, which was built after 1887. This wooden structure is located on the level of the first floor and supported by cast-iron buttresses. It was erected on a plan similar to a square, with a gabled roof covered with sheet metal. The first owner of the property was Jan Fryderyk Gottard Lehnardt, from 1865 – the Maltz family. The last, pre-war owners were Stanisław Tłuchowski and his wife Janina Sabina née Gutowski. There were several Catholic families and only one Jewish living in the property. It was the family of the merchant Tauchen Kapusta (1865-1894). In the interwar period, Moszek Zelman Kapusta (born in 1886) lived here with his wife Elka née Borensztejn and their children.

A unique, modernist style sukkah is located in the yard of the property at Grodzka 8 and can be seen from the side of Stanisława Małachowskiego Street. It adjoins the rear wall of a 19th century, two-story tenement house, intended for commercial and residential purposes, at the level of the first floor. Before the war, it was the property of Lewek Kilbert (1882-1942). In the interwar period, several Jewish families lived in the property, including the Budnik, Wolrat, Gelibter and Zylberberg families.

The sukkah is located on the back wall of a neo-Gothic, two-storey building erected around 1840. It is located at the level of the first floor and supported by concrete pillars. The hut was built on a square-like plan, with a wooden structure, it is vaulted with a single-pitched roof covered with sheet metal. The sukkah has two small square windows in the gabled part of the front wall. Dawid Chaim Segał was the owner of the property at 9 Tumska street since 1871. In 1912, the property was purchased by Lajbuś and Tauba Smrodynia aka Kon. In the interwar period merchant Nuchim Kuczyński, teacher Dawid Jarząbek, trader Lejb Lajzer Bomzon and corsetist Brana Taubenfligel lived there, among others.

The next three objects resembling sukkot are located at 18 Kazimierza Wielkiego St. as well as at 52 and 53 Sienkiewicza St.

The property is located in the eastern part of the northern frontage of Grodzka Street. The owner of the property from 1838 was Abraham Marsap. In 1864, it was inherited by Dwora aka Dorota Hendelsman nee Marsap, who sold it in the same year to Icek Fogel. In 1866, Mirel Marsap née Pinkus, became the owner. Her heirs sold the property to Paulina Majeran, and she – in 1873 – to Lewin Zeman. In 1875 Bernard Lewin and Markus Grünbaum were the owners of the property in equal parts. In 1880 Michał Żołobow bought it. In the years 1920-1922 the property was inherited by Maria Żołobow, who then sold it to Emil Żółtowski. In 1935 it was purchased by Waleria and Szymon Buksowicz. The sukkah used to be located above the entrance gate, on the back wall of the tenement house, at the height of the second floor. Constructed on a rectangular plan, with a wooden structure, it had an elegant form and modest, geometric architectural details. It was probably built before 1880. A few years ago, it collapsed during the renovation of the building. It has not returned to its place until today.

Until recently, the most characteristic in the city space of Płock was the sukkah in the property located at the intersection of Tumska and Królewiecka streets. The first known owner of this property was Józef Liberman, after the death of whom it was inherited by Markus Liberman, Szaja Liberman, Hana Lichtensztajn nee Liberman and Bajla Liberman. In 1867, the property was purchased by Andrzej Kowalski. From 1878, it was owned by Izrael Lejb and Masza Fiszman. From 1912, its owner was Abram Fiszman, the owner of a mineral water factory. After his death, Sura Ryfka Galewska nee Fiszman, Jakub Józef Fiszman, Lejzor Fiszman, Szoel Fiszman, Fajga Estera Kiełbik née Fiszman and Itta Brucha Firstenberg née Fiszman inherited the property. The sukkah was located on the back wall of a two-storey front building of a service and residential purpose. It was constructed on a plan similar to a square, it was vaulted with a single-pitched roof covered with sheet metal. The walls of the hut originally had large glazing, and the windows were subtly divided by muntins. Based on preserved archival photographs, it can be seen that even at the beginning of the 1980s the technical condition of the sukkah was good. Over the decade, however, it slowly deteriorated, so that at the beginning of the 90s the city conservator of monuments recognized its condition as catastrophic, and the object itself eligible for demolition and reconstruction in accordance with the detailed inventory. At the beginning of 2017, the sukkah was acquired by the Ethnographic Museum in Warsaw, which, understanding the special historical value of this object as a material trace of the presence of the Jewish community in Płock and northern Mazovia, decided to subject it to conservation and make it part of the museum exhibition. Let’s hope that soon the reconstructed sukkah from Płock will find an appropriate place in the Polish capital.