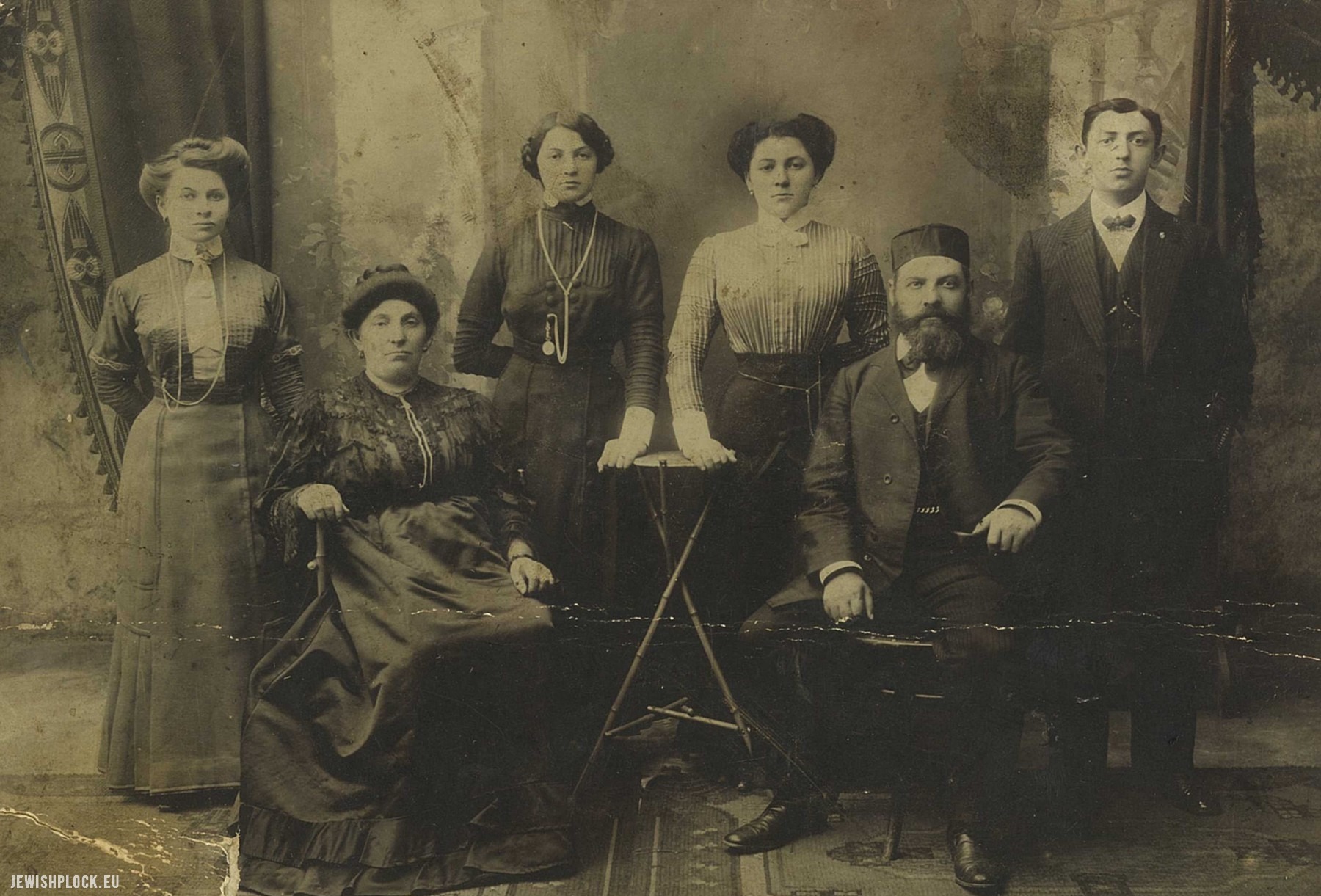 The records reveal that Bomzon family have lived in Płock from the beginning of the 19th century. My paternal great-grandfather, Izrael Abram Bomzon (1861-1913) was one of the six children of Dawid Szlama Bomzon (1826-1904) and Ruchla Łaja Bomzon née Liberman (1830-?) and a gingerbread baker. Sometime during the 1890s, he became the manager of a bakery, which was owned by Jenta Fridman née Szrajber and located at 28 Szeroka Street. In addition to managing the bakery, he also began romancing Jenta and was undeterred by her being a widow with three children and seven years older than him. Izrael Abram and Jenta lived together as a de facto husband and wife first at 21/23 Stary Rynek and then at 30 Szeroka Street. They registered their marriage with the Płock civil authorities on 22 August 1901 in order to secure their status and rights of their living children: the twins, Bajla Sura (born first) and Hersz Fajwel (born 14 January 1887 in Płock), Dwojra Ides (born 21 December, 1889 in Płock), Estera (born 16 April 1891 in Płock), Chawa (Eva; born 22 March 1892 in Płock), Lejb (born 17 May 1893 in Płock) and Brucha (born 21 June 1897 and died in 1906 in Płock). They also had a son, Chaim, who was born on 22 December 1895 and died on 12 December 1896 in Płock. After Izrael Abram’s death at age 52 in their home on 22 May 1913, Jenta moved to 20 Szeroka Street to live next door to her daughter, Dwojra Ides, and her husband, Lajzer Brygart. Jenta, my paternal great-grandmother probably perished in the Holocaust.

Bajla Sura Bomzon married Moszek Baruch Ejzenman, a tailor and trader, on 14 April 1907 and they had eight children: Chana Łaja (born 19 April 1909 in Płock), Estera Malka (born 1 April 1910 in Płock), Chaja (born 20 May 1912 in Płock), Iska (born 6 June 1913 in Płock), Lajzer (born 20 June 1915 in Płock), Hinda Ruchla (born 18 March 1917 in Płock), Berek (born 22 September 1919 in Płock), and Perla (born 4 January 1921 in Płock). The family lived at 19 Bielska Street. Chana Łaja, the oldest daughter, married Abram Mordka Łotenberg on 2 September 1928 and they migrated to Buenos Aires, Argentina where they managed a small tailoring factory. Iska, Lajzer (Leon), and Berek (Bernardo) also emigrated in the interwar period to Buenos Aires. Iska married Izsak Łotenberg and managed a women’s clothing store. Lajzer was a barber and Berek was a tailor who created custom tailored menswear. Their emigration was part of an emigration of Jews from Płock to Buenos Aires which started after World War One. Moszek Baruch Ejzenman also left Poland in 1939 to join his family in Buenos Aires. Bajla Sura and Perla perished in the Holocaust and Chaja died in Warsaw in 1938.

Two of Bajla’s daughters, Estera Malka and Ruchla Ejzenman survived the Holocaust in Magnitogorsk, Russia. Hinda Ruchla met her husband, Jósef (Jósiek) Szymanowski in Warsaw, when she went to say good-bye to a friend who was leaving for America before the Holocaust. They lived together and were formally married in 1941 in Magnitogorsk, Russia. They had four children: Leszek (born 11 April 1937 in Warsaw; died 19 September 2000), Mira (born 15 April 1941 in Magnitogorsk, Russia; died 1 August 2018), Roma (born 31 August 1944 in Magnitogorsk, Russia, died 12 October 2020 in Płock), and Krystyna (born 22 December 1950 in Płock). In 1940, she fled Poland with Jósef (Jósiek), her son, Leszek, and her sister, Estera Malka, when the frontier between Nazi-occupied Poland and the USSR was opened for refugees, thereby saving their lives. They wanted Bajla, their mother, to flee with them, but Bajla did not want to leave Jenta, her mother. In 1946, Hinda (Dasza Szymanowska) and her family returned to Płock and they lived at 10 Kościuszki Street until she died on 24 December 2002 in Płock. Her sister, Estera (Elżbieta Eisenman), who never married, also returned to Płock where she worked in the Gerszon Dua Knitting Work Cooperative for 20 years before retiring. She died on 11 March 2005 in Płock and the two sisters are buried in Płock.

Hersz Fajwel Bomzon, Bajla Sura’s twin brother, was a painter and an active member of the revolutionary faction of the Polish Socialist Party, which was outlawed when Poland was under the tsarist Russian partition. He was arrested and imprisoned in Płock under guard on 17 February 1908 by Płock’s gendarmerie after his surveillance by the Tsarist Russian secret police (Okhrana) and a search of the Bomzon family apartment in Askanas house on Szeroka Street where an unregistered loaded Nagan revolver and several illegal documents were found. On 19 September 1908, he was sentenced to four years hard labor in the Hard Labor Prison in Warsaw and deprived of all his rights by the District Military Court. It is assumed that he died in early 1912 because his identity document was returned to Płock in March 1912, six months before his scheduled release from prison on 19 September 1912.

Dwojra Ides Bomzon married Lajzer Brygart on 23 February 1913, and they had four children: Ruchla Łaja (Rushka; born 8 October 1916 in Płock), Iska (Irka; born 3 March 1919 in Płock), Szmył Szłojme (born 4 July 1920 in Płock), and Chanka (born 16 March 1927 in Płock). After Izrael Abram’s death, Lajzer became the bakery’s manager. As its manager, he modernized and expanded the bakery to include the sales of colonial goods and other consumer goods, such as sugar, rice, coffee, tea, cocoa, and tobacco, which were imported from England using Dwojra’s sister, Chawa (Eva), who lived in London, as their agent. Ruchla Łaja, their oldest daughter, married Izrael Hilel Frydenson (Fridenson; born 14 January 1914 in Warsaw) on 8 October 1938. Szmył Szłojme (Sam) was the only member of his family who survived the Holocaust. In 1949, he emigrated to the USA and died on 5 August 2015 at age 95 in Los Angeles.

Estera Bomzon married a trader, Jósef Hersz Cynamon (born 28 April 1886 in Płock) on 27 January 1914, and they had four children: Izrael Abram (born 28 September 1914 in Płock), Chana (born 3 January 1917 in Płock), Lajzer (born 24 October 1922 in Płock;), and Ruchel (born 14 June 1926 in Płock). The family lived at 28 Kwiatka Street. Izrael Abram was the only member of his family who survived the Holocaust. With the outbreak of war, he fled to Russia and joined the Polish army of General Władysław Anders. When Anders’ army reached Palestine (Israel), he left the army and ultimately became a small-scale poultry and citrus fruit farmer near Tel Aviv. He died in 2003 at age 89 in Israel.

Chawa (Eva) Bomzon left Płock in 1910/1911 to live in London, England, where she married Izak (Isaac/Harry) Wagner (born 1892), a barber, and with whom she had three children: Lazarus, Israel (Izzie), and Harry (Wolf, Woofie). Izak Wagner died at age 26 on 31 October 1918 in London, England from post-influenza pneumonia. Following his death, Eva gave birth to a daughter, Helen (Hilda), whose father was Solomon Goldstein, a cabinet maker. Shortly after Helen’s birth, she married Joseph Golding, a tailor, on 17 January 1923 and with whom she had four children: Rose, Martus (Montague/Monty), David, and Nathan. Joseph Golding died at age 33 from bronchopneumonia and bronchitis in 1934. Chawa never returned to or visited Płock during her lifetime. She lived most of her life in the east end of London, England and supported herself by working in a pickle factory and as a seamstress. She died at age 75 from a chest infection and cancer of the common bile duct and is buried in the Western Synagogue Cemetery, Montague Road, Edmonton, Greater London.

My paternal grandfather, Lejb Bomzon, was a baker and confectioner, who worked in Brygart bakery, and married Tauba Żeleźniak (born 1 April 1898 and one of the daughters of Chaim Jósef Żeleźniak and Chana Żeleźniak née Motyl) on 10 May 1917 and they had three children: Izrael Abram (born 7 February 1918 in Płock), Icek Jakub (Kuba; born 10 January 1922 in Płock) and Chana (born 10 June 1926 in Płock). Lejb Bomzon and his family lived at 33 Bielska Street. My maternal great-grandfather, Chaim Jósef Żeleźniak, was a butcher and he perished in the Holocaust. His wife and my maternal great-grandmother, Chana Żeleźniak née Motyl, died in 1915 in Płock.

My father, Izrael Abram Bomzon (Julius) was the only member of his family who survived the Holocaust and he never visited Płock during his lifetime. After his liberation from Buchenwald in 1945, he traveled to Paris, France where he met his wife, Bella Kociołek (born 23 July 1924 in Warsaw). They married on 5 April 1946 (civil) and 7 April 1946 (religious), and after the birth of their only son, Lionel (Arieh; 5 February 1947 in Paris), they emigrated to Sydney, Australia in September 1947. After their arrival in Sydney, Julius worked as an unskilled laborer in a confectionary factory and Bella worked as seamstress. In the late 1950s, they established a small women’s clothing workshop and then opened several women’s clothing stores. They retired in the late 1970s and moved to Israel in 1990 to be close to Arieh and his family. Julius died on 29 May 1996 in Israel and Bella lives in a residential care facility in Hadera, Israel. Arieh married Therle (Tova) Hoffmann (born 7 November 1947) in 1972 in Johannesburg, South Africa, where they had three sons, Wayne (Ze’ev; born 20 December 1973), Keith (Ilan; born 22 September 1975), and David (born 1 October 1977). On 23 July 1981, Arieh and his family emigrated to Israel and was a member of the Faculty of Medicine’s academic staff of the Technion, Israel Institute of Technology, in Haifa until his resignation in September 2006. Arieh’s three sons and their families live in Israel.